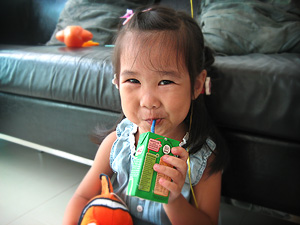 Cleo loves Finding Nemo. She have a stuff toy of the clown fish and she hugs it all the time. There was once she happen to throw it out the window maybe just for the fun of it, but after a while she got really sad. We went downstairs to try and find it, but its no where to be found. It must have got stucked somewhere.

I gave her a good lecture, I brought her to the window and told her Nemo was gone. I told her to face the window to say goodbye to nemo. She did… and when she said “bye bye Nemo…”, her voice started to shiver, her breathing got heavier, she started to cry, like a child saying goodbye to her best friend.

I felt bad, but i wanted her to understand the seriousness of throwing stuff out of the window. 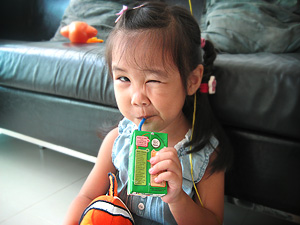 The next morning when she got up for school, she burst out crying. She said her Nemo was gone. She realised that its not a matter of sleeping one night and Nemo will come back the next day. Nemo was really gone.

Quite sadly, she went off to school.

In the day, we found out that her stuff toy actually got stuck on top of a shelter downstairs. I got the ladder, armed myself with the clothes hanging pole (what do you call that??) and Nemo was rescued. Being out in the elements for the night, Nemo needed a good wash.

The next day, Cleo found Nemo as her Nemo emerged from the washing machine. I’m not too sure if she knew what happened, but maybe she thought it was a miracle or something. She was visibly happy. 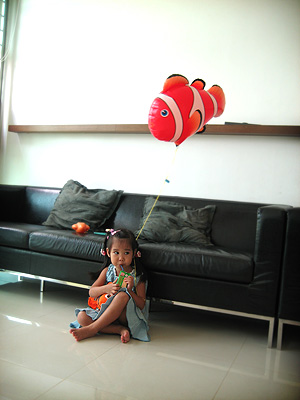 Recently, we went to Underwater World and the best part of it all for Cleo would have been the big Nemo balloon. She brought it EVERYWHERE for a solid 2 weeks. She had one end of the string on her hand at ALL TIMES. She brought it to the malls, to the playground, to church (but we insisted it stay in the car). It was just amazing seeing her holding on to it bobbing over her head like a guardian angel providing her with joy and company.

Oh… did i mention about the Finding Nemo handkerchief that she MUST bring to school everyday!! i just found out recently. Her dedication is AMAZING.

she is way cute! winking her lil eye 🙂
and i can totally imagine her face when she said bye to nemo.
but it was a good lesson, and memorable too! good on u 🙂

where did you buy the nemo stuffed toy? 🙂